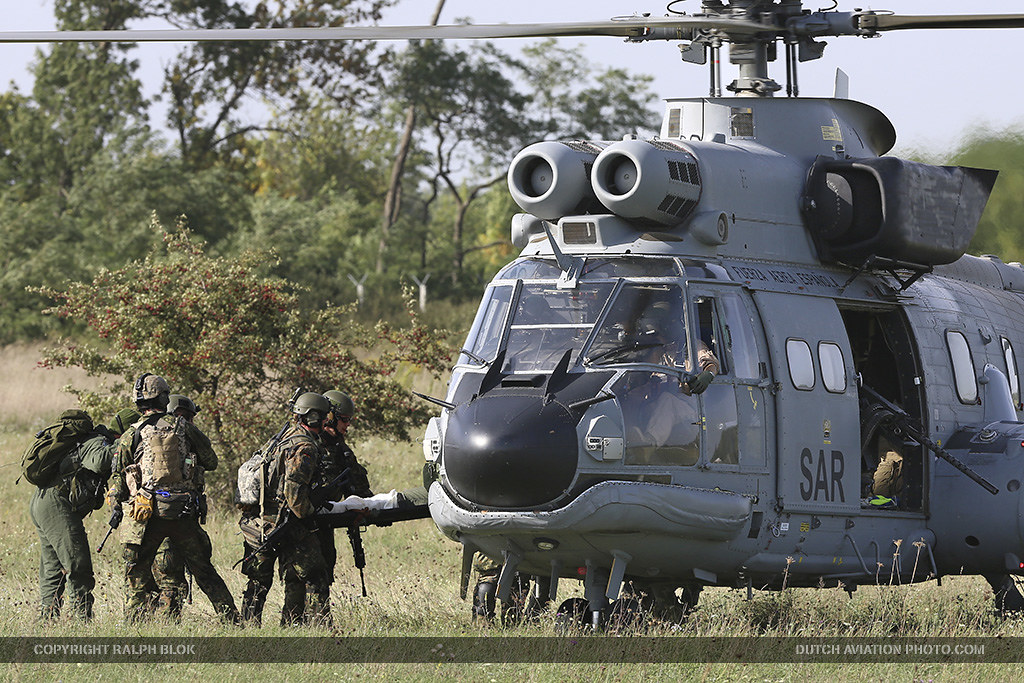 CJPRSC 2015 COMBINED JOINT PERSONNEL RECOVERY STANDARDIZATION COURSE
Between 9 and 24 September 2015 the Hungarian Army Pápa Air Base was home to the Combined Joint Personnel Recovery Standardization Course (CJPRSC), an exercise built around personnel recovery. Over 400 people from 13 countries participated, and 22 aircraft were involved in the missions.
For the last 9 years the CJPRSC exercise has been a European Air Group project, but this will be the first CJPRSC to be fully conducted by the European Personnel Recovery Center (EPRC), following its establishment at Poggio Renatico, Italy in July 2015.
In the current climate of declining budgets and limited resources it is important to focus available multinational assets in order to create an adequate Personnel Recovery system.
While nations have created certain Personnel Recovery capabilities on their own, these endeavors have not resulted in an effective multinational Personnel Recovery architecture. As a reaction, the European Personnel Recovery Center was established by the participating nations in the European Air Group to fill this void. The importance to reduce the risks of isolation, capture or exploitation of personnel starts to become more pressing.
“Today we live in a peaceful setting, but the unexpected can occur at any time. We must stand ready to help, but not just the military operations, saving of civilians has the same priority. Personnel Recovery is a vital capability.” said Hungarian Air Force Commander, Brigadier General Albert Sáfár during a press conference in his opening speech. He continued by saying that the exercise can make it possible for participating nations to better understand each other, gain experience and to share what they learn. He summarized the exercise goal with this sentence: “During operations, all soldiers must know that they are not alone, no matter what happens.” 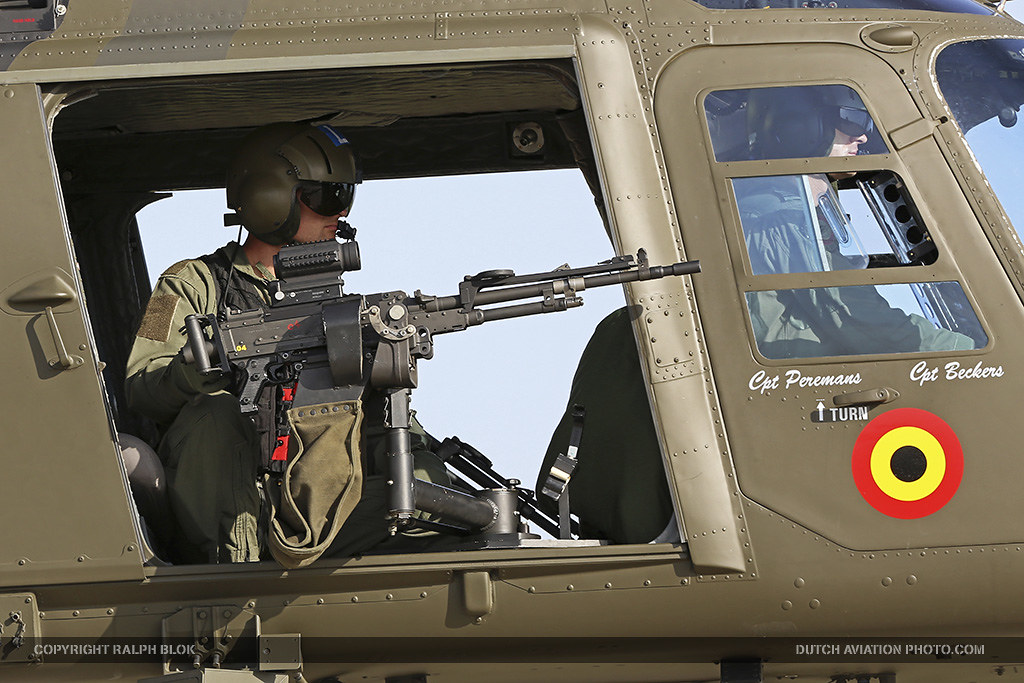 Lieutenant Colonel Uwe Schleimer EPRC Area Director – EPRC – European Air Group states the purpose of the exercise: “We want to create a scenario to enable our forces to train in the most effective way we can. We have to make sure we get everybody up to a good standard.” The former back seater has 18 years experience on the F-4 Phantom with the German Air Force, before he started “flying desks” as he’d like to put it. He was a deputy course director in 2007 when the first personnel recovery course started.
Ever since the beginning, he and his colleagues wanted to “Develop a course from an exercise which was a run on an annual basis and was covering search and rescue.” At that time he discovered that “personnel was not very knowledgeable with the operational procedures involved.” The course has evolved a lot since it started in 2007, “We look at this course every single year, and make sure it is as current as possible. We are adaptive, we are not fixed to a course of action. We of course have certain limits, like the airspace we have booked, but we are very flexible.” 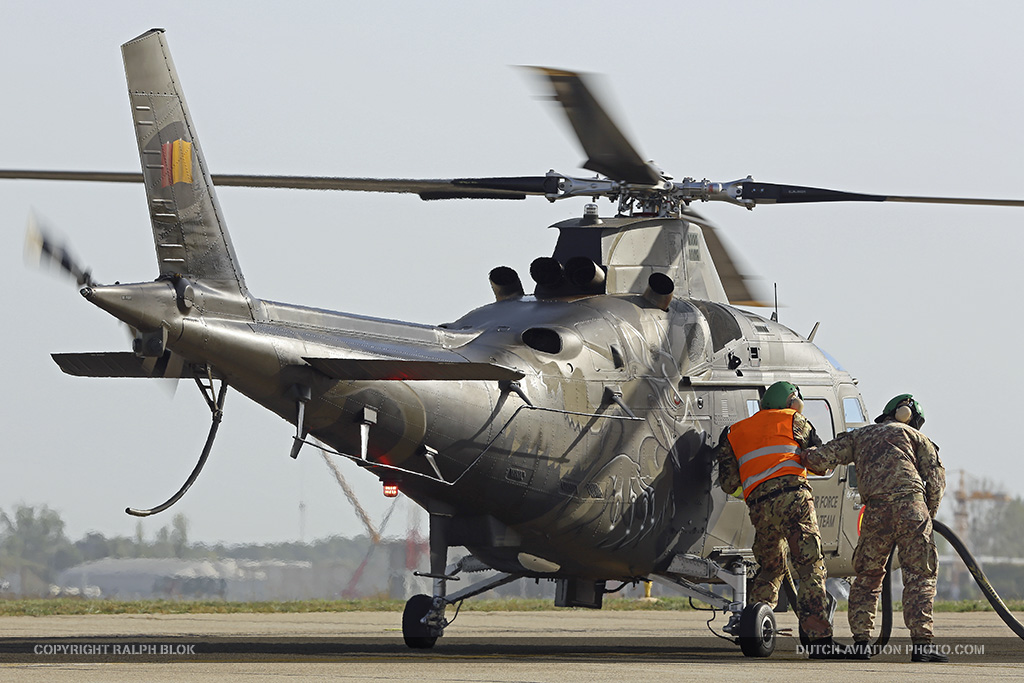 CJPRSC is the only training opportunity for Personnel Recovery in Europe, the only other alternative is held in the United States. Schleimer claims that “more than 1500 Personnel Recovery operators were trained in Europe over the years.”
The aim of the course is to educate and train multinational Personnel Recovery task force elements to plan and execute Personnel Recovery operations in accordance with NATO / EU standards. Four phases are developed for the course: preparation, planning, execution and adaptation. This is to enhance the knowledge and proficiency required to plan and execute a PR mission. It’s also important to improve and streamline international cooperation with other European and NATO partners. The objective is to enhance proficiency in flying within a Personal Recovery Task Force as an element of a Composite Air Operation (COMAO). Schleimer emphasizes: “Every year we try to adapt and change the course to make it better.” 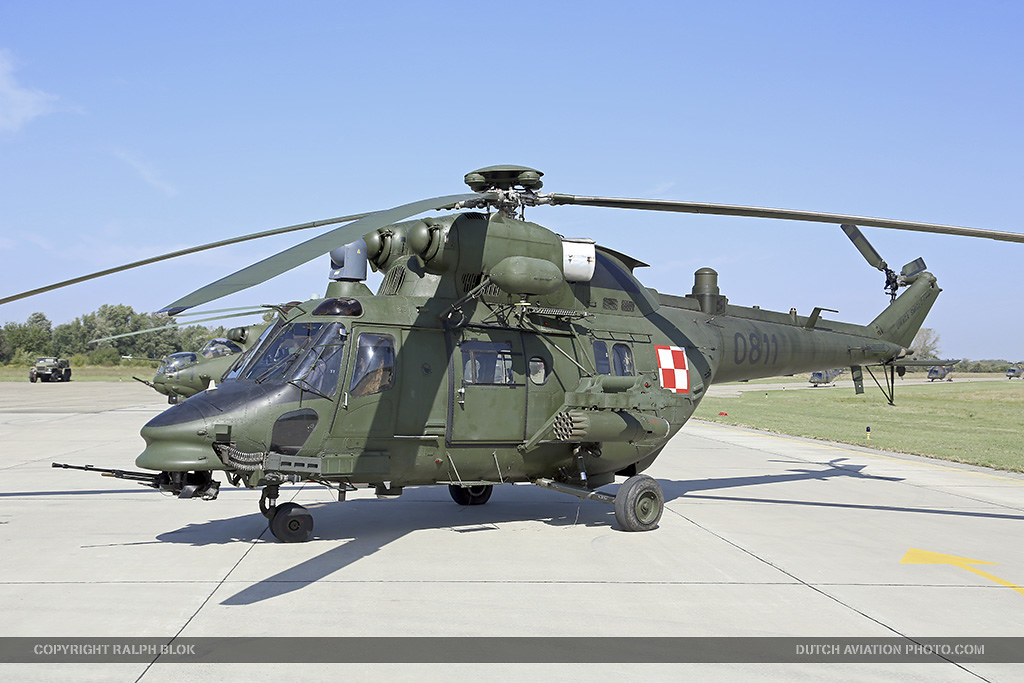 Additionally, the course focuses on an academic and a flying phase with the aim to compose a flexible and adaptive task force. Mission planning is integrated in to the course and aligned with standard COMAO procedure without losing focus on the Rules of Engagement, which is obviously a vital element of modern day combat operations.
Lieutenant Colonel Schleimer tells us that “the academic phase covers everything, so everyone has a minimum baseline. It’s necessary to update knowledge, because knowledge may be one or two years old.” Participants learn what the assets can do in the PR environment. They also do a dry run before we fly. Schleimer continues: “We allow the people to work together. They have got to have a little time to prepare and to consult with each other.” People are deliberately mixed in the missions: “Missions are set up to force extraction forces for example to work with different helicopter crews. Refueling crews at the FARP are consisting of different nations.” 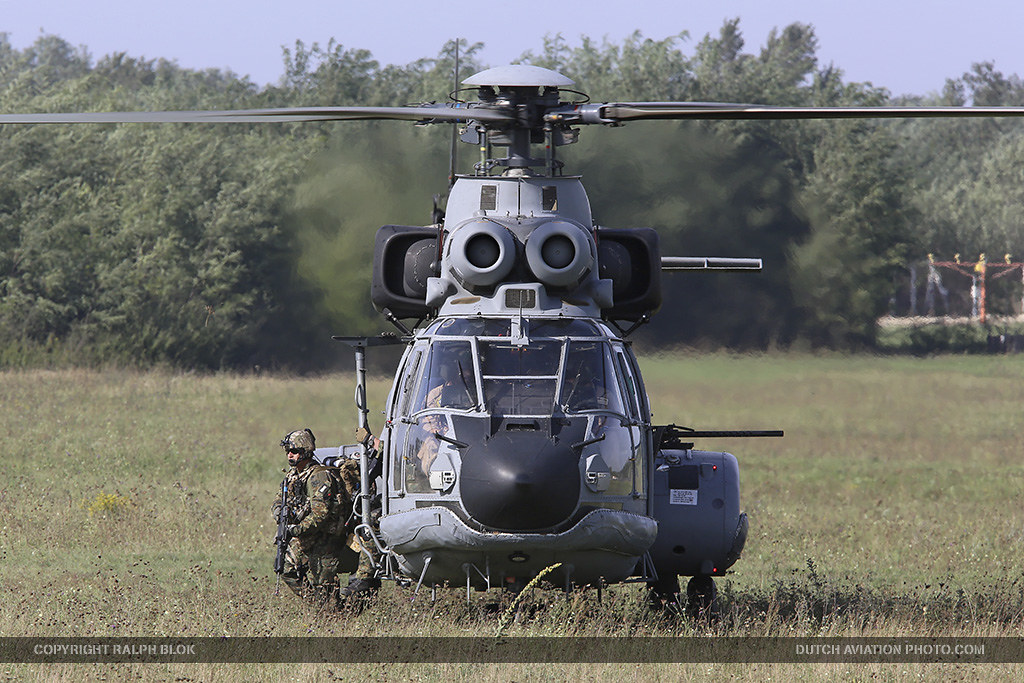 The flying phase consists of 4 day missions and 2 night missions. Early on in the exercise, the missions are only flown in daylight, and are easier, to build confidence. Later on the missions get more difficult, and night flying missions start to take place.
Schleimer explains about the night missions: “In the first nigh flying missions, we scale down the complexity of the mission. Night operations are much more complicated, there are many other things to think about.” For peace time night flying there are also legal implications to consider.
Forward Arming and Refueling Points (FARP) are dispersed across the exercise area to support the task forces as required. This support activity allows Nations to practice operating procedures on various aircraft types. 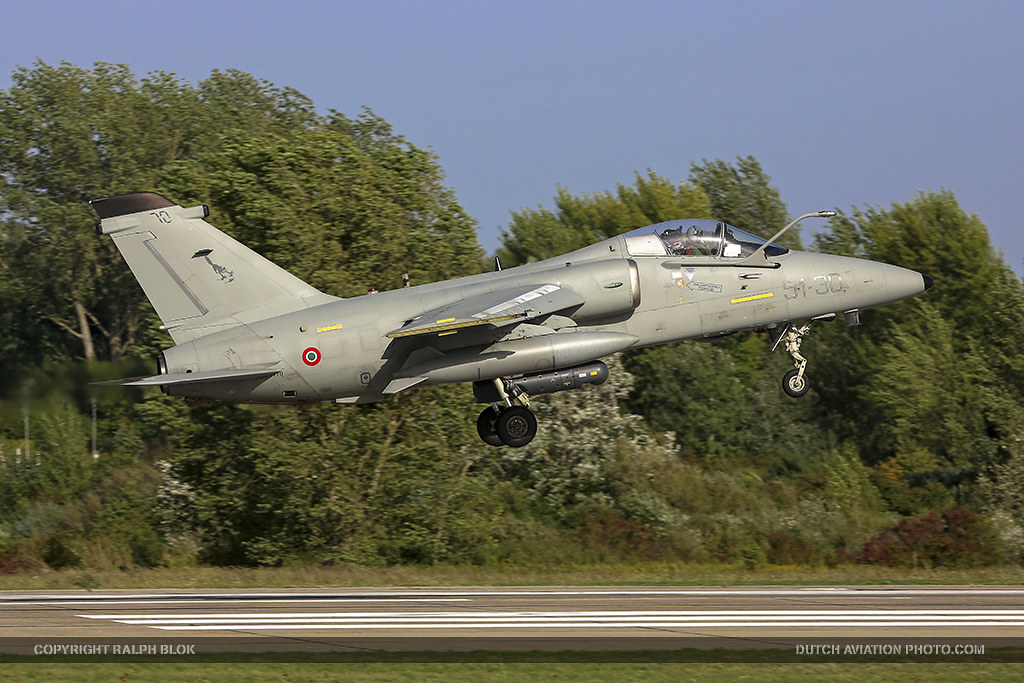 A CJPRSC mission has to be a most faithful possible representation of the reality participants could face in a war mission. Train as you fight is the motto here. It is planned and implemented in the same way as it would be in a real-world scenario.
The objective of the European Personnel Recovery Center is to improve the participants capabilities in the fields of Personnel Recovery. They aim to establish and maintain a network with all PR actors within its sphere of influence.
The EPRC serves as a hub and controlling element to ensure standardization on PR. Its goal is to ensure that synergies are realized and that duplication of effort is avoided. And ultimately, the aim is to become Single Point of Contract for all matters concerning PR in Europe. A multinational survival, evasion, resistance and escape working group has been established in order to achieve interoperability and standardization within education and training of potential isolated personnel.
Nations Personnel Recovery training for the earmarked personnel has to ensure that potential survivors in a hostile environment can be recovered by any combined Joint PR Task Force in the most professional and safe way. 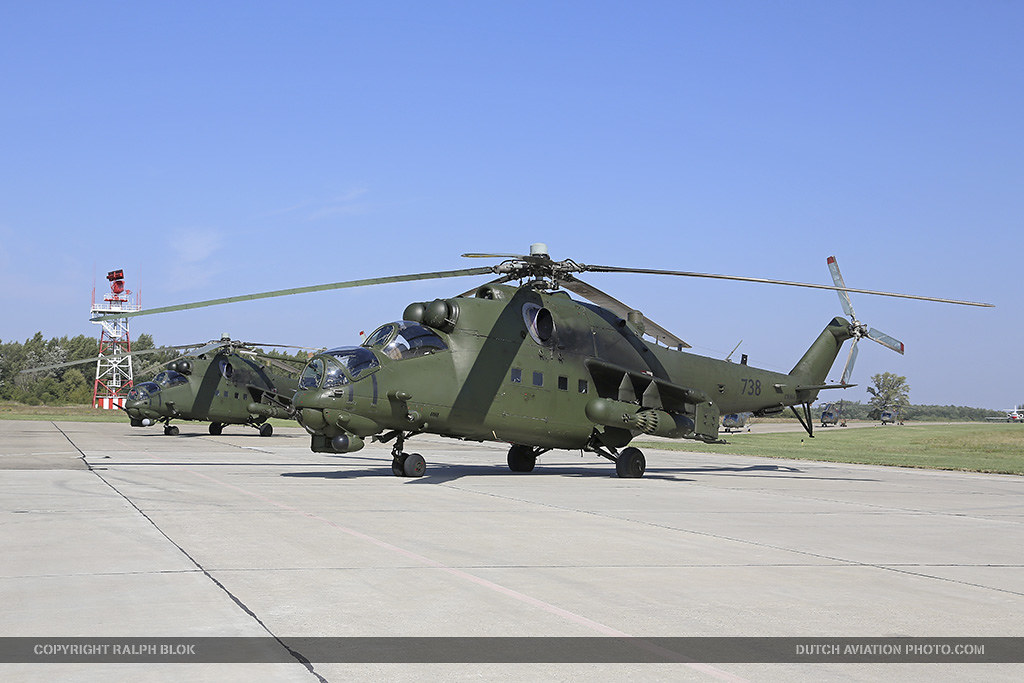 There still is a lot to learn. Lieutenant Colonel Schleimer is very open about that: “We found out that communications are a real challenge, because we have 6 nations trying to speak English with a com-jam on top of it. We also found out that the Tactical Technical Procedures are different in all the nations. They need to be aligned in order to allow for optimum use of a combined task force.
Another learning point the director of the course found out is integration of the fixed wing, rotor wing and extraction forces. “It is a real challenge because those elements do not usually fly together, not even in their own nation. This is one of the very few occasions where you have rotor wing and fixed wing operating together. It is difficult to believe how difficult it is for a rotor wing guy to understand the mindset of a fixed wing guy and the other way around. The exercise is really eye-opening.”
Full Operational Capability (FOC) for the European Personnel Recovery Center is expected in 2016. The EPRC will be able to train and educate leaders and specialists, improve PR interoperability, reduce the collective reliance on the USA for PR capabilities, and provide support for all international PR activities in Europe across all levels of command.
Especially in expeditionary operations PR has become an indispensable part of the operational concepts that are employed. With the arrival of the EPRC, European nations and organizations can, for the first time, call on a single organisation that supports their Personnel Recovery efforts.
The next CJPRSC exercise is said to take place in Lechfeld, Germany in 2016.